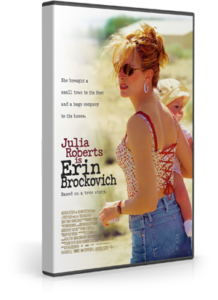 Universal Studios made a film titled, “Erin Brockovich”, which stars Julia Roberts. Julia won an Academy Award® for her portrayal of me. People ask me all the time, is the movie true and accurate? YES, the movie was true and probably 98% accurate. They took very few creative licenses.

Yes, I did dress that way. I was actually taken back by the response of many people regarding my wardrobe. I just dressed that way because it was fun and I liked it. I was taught never to judge a book by its cover. My clothing was nothing more than a cover and I have never thought that anyone was smart or stupid or anything else by the way they chose to dress.

Yes, I had a potty mouth in the movie and I still do.

On a couple of occasions I have caught the headline that I am a trash talking crusader. If you are referring to my potty mouth then I am the trash talker. No, I am not trash from the other side of the tracks. I come from quite an educated family. My dad is an industrial engineer and my mom is an English major specializing in journalism.

Yes, I was a three time divorcee with three children.So what ?.People don’t realize that I started my work in the Hinkley case in 1991 when Elizabeth was only one year old. Katie was then six years old and Matthew was seven years old.

The Hinkley case settled in 1996 and I was approached about the movie and giving up my rights in 1995. It wasn’t until late 1997 or 1998 that they really started gearing up for the movie, finding writer Susannah Grant and the director Steven Soderberg and eventually Julia Roberts. The movie came out in May of 2000 and the kids were then 17, 16 and 9. 12 years have now passed since the first film and the kids are now 30, 28 and 22. I could not be prouder.

What PG&E did was real. Don’t be fooled by other things that you have read. As early as 1965 this company knew that the facility in Hinkley, California was contaminating the ground water with high levels of hexavalent chromium and they chose to cover it up.

The movie had its positive and its negative effects on my life. I didn’t aspire for this to happen. All I was doing was what was in my heart to do and that was to extend my hand of friendship, understanding and compassion towards another. Had my intentions been anything other than pure, this case, this movie and my life, as it is today would not exist.

Julia Roberts stars in this legal drama based on the true story of a woman who helped win the largest settlement ever paid in a direct-action lawsuit. Erin Brockovich (Roberts) is a single mother of three who, after losing a personal injury lawsuit, asks her lawyer, Ed Masry (Albert Finney), if he can help her find a job. Ed gives her work as a file clerk in his office, and she runs across some information on a little-known case filed against Pacific Gas and Electric.

Read about the national water crisis, toxic chemicals, and other backyard problems in Erin's newsletter, The Brockovich Report